The above haiku was written by my dad’s cousin Lesley, an accomplished and award-winning poet, and was inspired by my great-grandmother’s buttermilk rye bread.  My great-grandmother, Emma, grew up on the southern tip of Sweden within sight of the sea.  Her father owned the local flour and saw mill and also tended to fruit orchards on their land.  The microclimate where they lived was relatively mild and hospitable to growing fruits such as apples, plums, tart cherries, currants and berries.  As a child Emma travelled all over Sweden by train with her father selling the fruit they had grown.

In her early teens, Emma fell in love with a local boy, Sven, who was not as well off as she.  He was determined to go to America and make a better life for himself and eventually Emma.  Sven left Sweden and sailed to America, settling in Illinois.  He changed his name to Swan and found work on a farm, learning to speak English in the process.  He eventually returned to Sweden to get Emma and bring her back to America with him.  The two were married in 1911.

The couple decided to settle in the Minneapolis, Minnesota area as it was home to many Scandinavian immigrants and had a climate and landscape that felt familiar to them. Because of his English speaking experience, Swan was able to find a good job in Minneapolis.  He worked as a chauffeur for a wealthy man who was a director for General Mills.  Emma was quite social and became known for her afternoon fika gatherings, charming the local women with her baked goods and hospitality.

This buttermilk rye bread is one of her recipes that has found its way into my baking rotation.  A tender crumb thanks to the buttermilk and a hint of orange and anise make this an exceptionally warm and comforting bread, perfect for wintertime.  It definitely has a festive, Christmasy quality to it, but it could certainly be made throughout the fall and winter months…and beyond!  The combination of rye, orange and anise is as addictive as it is unusual.  I often find myself craving a slice, slightly warm from the oven, spread with a generous layer of salted butter.  And a cup of coffee, of course.  Despite its citrus and spice notes, Swedish Limpa can serve as a base for your smørrebrød, as long as the sandwich ingredients you use compliment the warmth of the bread.  I have also heard it suggested that you use Swedish Limpa crumbs in your Swedish meatballs, but I have yet to try it.

I am so grateful for recipes like this, handed down through the generations with stories attached to them.  Making this simple bread is a very tangible way to connect with my great-grandmother, revisit her stories and honor her legacy.  What can you make in your kitchen that will connect you with your ancestors?  What recipes do you need to write down in the hopes that they will be carried forward to future generations?  Food can be such an extraordinarily powerful link between past, present and future.

The zest of 1 orange

Looking for new ways to enjoy your morning oatmeal? This Baked Nordic Oat and Rye Porridge is a delicious twist on your typical bowl of oats. Think of it as an oatmeal casserole of sorts! My recipe calls for a combination of rolled oats and rye flakes (SO nutritious and satisfying). But you can easily do all rolled oats instead. Recipe is on the blog today, link in bio above. #porridge #oatmeal #rye #nordicfood #scandinavianfood #truenorthkitchen
Happy Smørrebrød Saturday! Is that a thing?! SHOULD it be a thing? Well it is today. Lots of us are at home baking more bread than usual these days. Open sandwiches are a great way to put that bread to use! This Roasted Beet Hummus with Avocado and Pickled Onions is a great example. Recipe is on the blog today, link in bio above. #smørrebrød #smörgås #nordicfood #scandinavianfood #danishfood #rugbrød #rye #beets #avocadotoast #newnordic #truenorthkitchen
A friendly reminder...tomorrow is Waffle Day! And you might just have everything on hand to make them. (*HINT* You can make a buttermilk substitute by combining regular or nut milk with a tablespoon or two of lemon juice or distilled white vinegar. Let it sit for 5 minutes or so until the mixture begins to thicken and curdle slightly). Search my blog for Nordic Buttermilk Waffles if you need a good Scandi-inspired recipe to help you celebrate. They are buttery, crisp with just a touch of cardamom. So, so good! #waffleday #våffeldagen #nordicfood #scandinavianfood #swedishfood
I’ve had a lot of questions recently about creating a sourdough starter, so I’ve added A Simple Guide to Creating Your Own Sourdough Starter to the blog this morning, link in bio above. IF YOU ARE LOCAL (Omaha, NE), I am happy to share some starter with you. DM me if you are interested or have questions I can answer about creating a starter or baking sourdough bread. I am here to help! #sourdough #sourdoughstarter #nordicbaking #scandinavianbaking #truenorthkitchen
Need an easy weekend baking project with ingredients you’re likely to have on hand? I’ve got you. These Brown Butter Swedish Oat Crisps are deliciously thin and crispy with toasty caramel notes (thank you, brown butter). And drizzled with chocolate! Put the coffee on and whip up a batch! ☕️🇸🇪 Recipe is on the blog today, link in bio above. #oats #havreflarn #swedishbaking #nordicbaking #scandinavianbaking #oatmealcookies #fika #hygge #truenorthkitchen
Potatoes on a sandwich? Absolutely. This New Potato Smørrebrød with Garlic Aïoli and Crispy Shallots is one of my favorite Nordic open sandwiches, and a true classic. Hearty rye bread topped with leafy greens, thin slices of potato. A dollop of garlicky sauce and crispy shallots...what’s not to love? The recipe is on the blog today, link in bio above. #smorrebrod #smörgås #smørbrød #rye #rugbrød #danishfood #scandinavianfood #nordicfood #vegetarian #truenorthkitchen 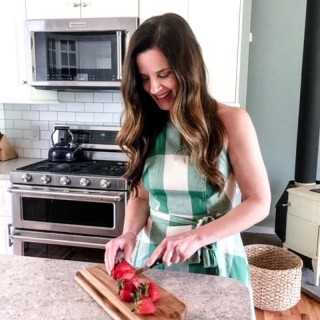